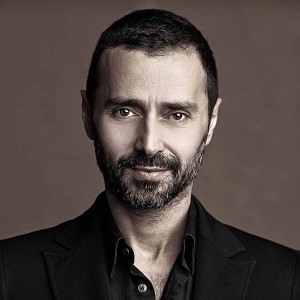 Fabio Novembre, unlike many designers, expresses his appreciation for life, love, and sexuality through design. Rather than creating for the purpose of sales or popularity, he believes strongly in creating out of passion, for the reason of being. His designs are much more than just a product; instead they represent a meaning, a story that Fabio has uniquely created which makes him a truly one of a kind designer and individual.

Born in 1966, Fabio has become somewhat a household name without being in the game for all that long. He has gained much respect throughout the industry working with popular brands Casamania, Driade, Bisazza, Bitossi, Venini, and Cappellini. Most famous for his re-design of the infamous Panton chair, the Him & Her chair manufactured by Casamania was actually voted worst design of the year by Wallpaper Magazine. Where most would have found disgrace, Fabio was actually proud of this, and in turn this risqué’ version of a classic became and continues to be a world wide success. His love for the human body has been subject to many of his of projects, and although at times push the envelope, he has a way of bringing out the beauty without crossing the line. In 2001 Fabio designed a nightclub called Divina, which represented the theme of the venue that was made very clear. Using the most famous historical nude paintings, he created an environment based on the naked woman. If the hanging paintings didn’t get the point across, he backdrop of the main bar was an extreme close up of the female genitalia with the script “L’origine du Monde”; an image I can guarantee was never once used in this context but somehow made sense coming from the mind of Fabio Novembre. He explains his approach saying “The naked female body is pure essence, exploring its secrets opens the doors of perception, relating to its beauty makes you adore it. The advertising mechanisms of using naked female bodies for selling any kind of product is just a vulgar application of a concept as old as the world. I wanted all these thoughts to be filtered through the classicity of 500 years of art history, through the elegance of ageless visionary adorers.”

He describes his creation called ‘Green Line’ for Bitossi as a lesson we should all listen to and learn from. Inspired by flowers that grew through the asphalt of a street in Beirut called ‘The Green Line’ that separated the Christian and Muslim population during a time of war where no one could cross that street due to the gunfire and violence. He says “flowers don’t give a s**t that we are fighting with each other, they grow anyway”. His belief that flowers will continue to grow even when we as humans are at our worst because there is always a better way of doing things, and a flower is this symbol.

Fabio Novembre is a simple man with simple pleasures. He believes trees are our angels and without them we are nothing. A man that accepts chaos yet refuses to drive. He considers himself a “monkey in the jungle” as he is always at complete peace with himself. He once said “I want to breathe till I choke. I want to love till I die.” In my eyes this is a man who finds beauty in all and will continue to do so until his final breath.